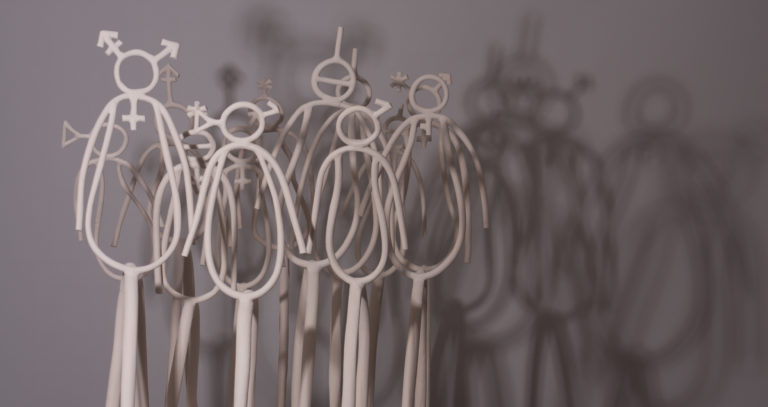 “They all are striding now” ceramic instalation, 2018

Where do the figures with the many gender symbols stride to?
In this work, the act of moving and where do they go are the most important facts. They move symbolically from the undefined, nameless, and unspoken into an active, tangible, political reality – out of the state of “being endangered”. To get out of this situation, they need a name: transgender, genderqueer, bigender, gender fluid, etc.. Where do they go is up to them.

What do you mean by “being endangered”?
I allude to the pathologization and discrimination of those who are considered “out of the norm” by the society. We are vulnerable when we are called by names or categorizations, such as “woman” or “man”. Under such categorization, life seems to us not livable, because we can not identify us with them and we suffer from it. We suffer under such constructions, which could even lead us to commit suicide.

Your work is called “They all are striding now”, what do you mean by “now”?
The installation refers to the sculptural work of Alberto Giacometti. He was the sculptor who put a man in the state of walking. However, his female figures are always passive and are frozen in the state of standing still. This fact has made me think about the individuals who has a big need to move or to break out of this status nowadays. When I was handcrafting the female figures, they fractured under my hands after two ours of existing. This mishap has inspired me of another idea. I decided to bring ALL people to move irrespectively of their gender attributions – Male, Female, Bigender, Transgender – in a word, all those who has a name.

And what about those who have no name?
They must remain in the precarious, in the state of being endangered until they find a name for themselves.

And what about the screaming figure?
This figure is the only one who does not move. It could be the incarnation of the nameless. This figure is isolated from all others, frozen in passivity.

Your works are very delicate for ceramics. Did you have difficulties making it?
In fact, every third figure broke before I could burn them. But I would not say it was a difficulty. I see this process of breaking the fragile material similar to the fragility of the construction of the human identity, in which the gender identity stands at the key position of all.

Is the question of the gender so important?
People need concepts to be able to orient themselves in this world and time has shown that one can not go any further with the attributions man and woman. That’s why we have to think “queer”. For me, it means nothing more than inserting a gap in the structures of power. Nowadays there is a rich variety of attributions. However, the real problem of attribution is not resolved with this variety, but for many people, it is an entrance to a livable life. One day even these attributions will be not enough and then we have to think “queer” again.

Do you see the figures as individual objects, or are they all groupped together as an art installation?
I think they are survivable both as individual figures and as in the mass of an art installation. Of course, the variety is more impressive. In addition, I am impressed by the shadings, and by the linear chaos which is created by the quantity. It is an important question on how to present the figures. Each type of set-up or exhibition brings different associations. It makes other ways of thinking possible

Have you consciously renounced a cis-female or cis-male figure?
Consciously may be not the right term here. Since several “male” figures have fractured under my hands and the “female” sculpture has failed formally, I thought to myself that I will completely renounce them. To have men move forward and womens moving and stepping on me is a classic feminist theme. I would like to treat this topic more decidedly. Now, I am really concerned with the newer gender attributions, which have escaped the invisible in recent decades.