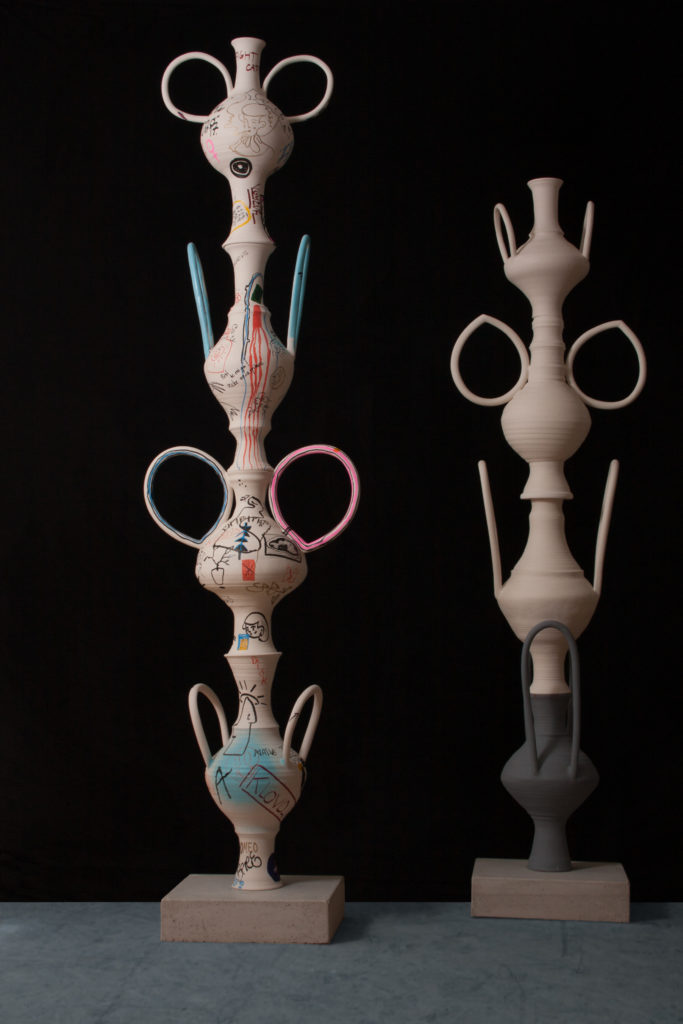 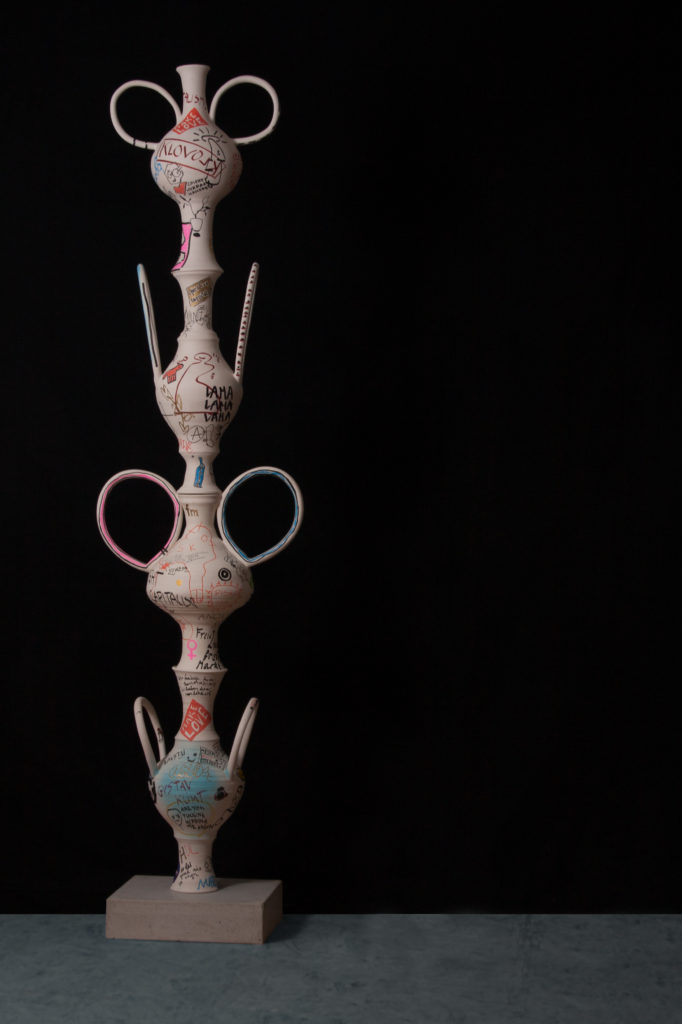 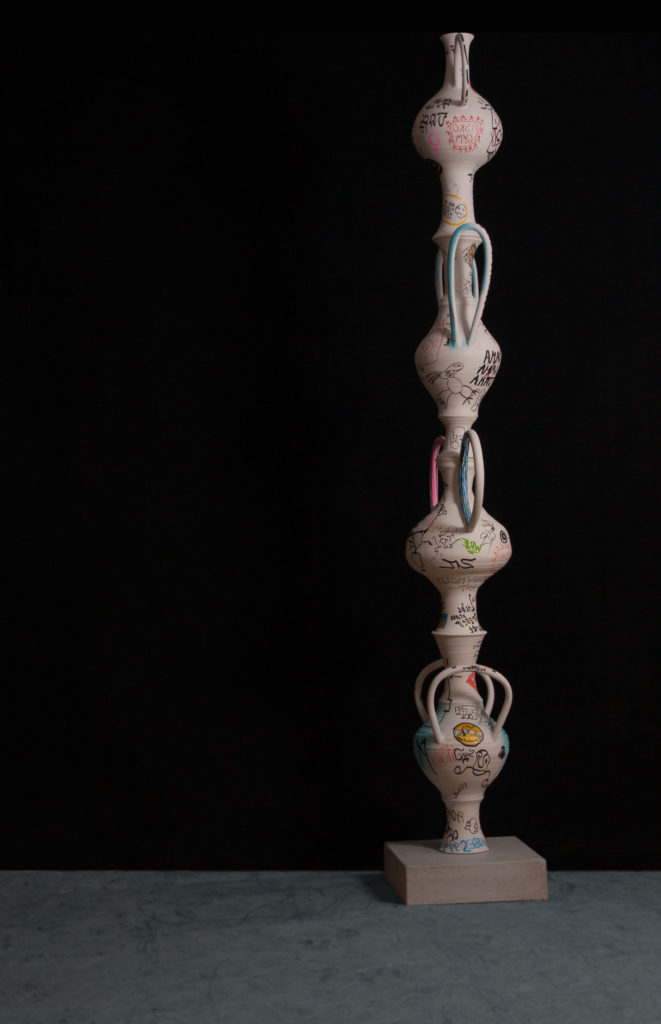 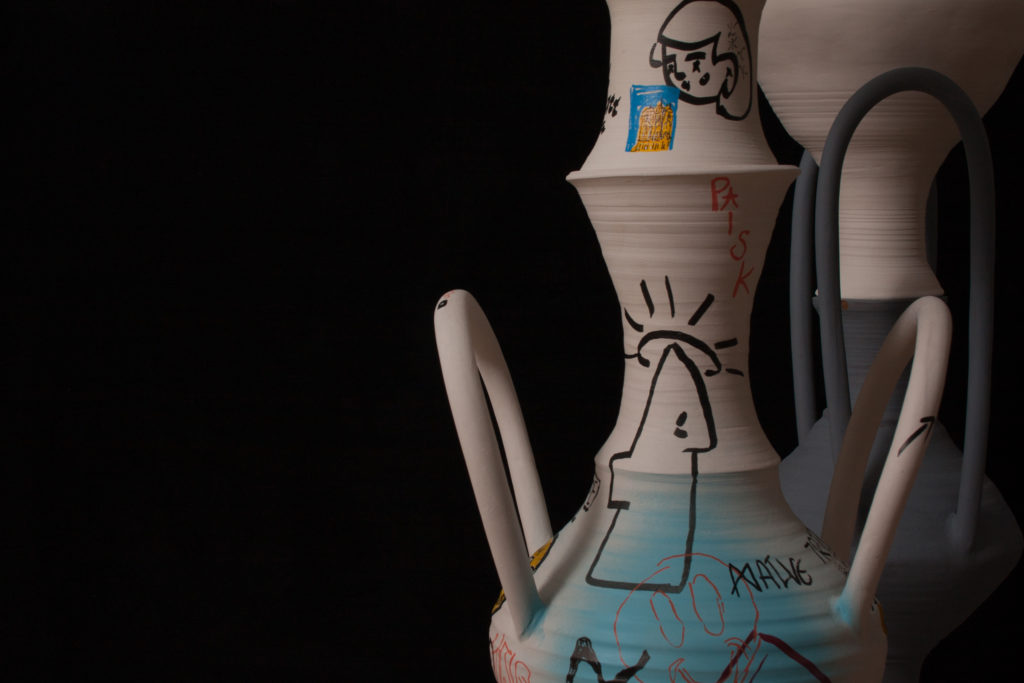 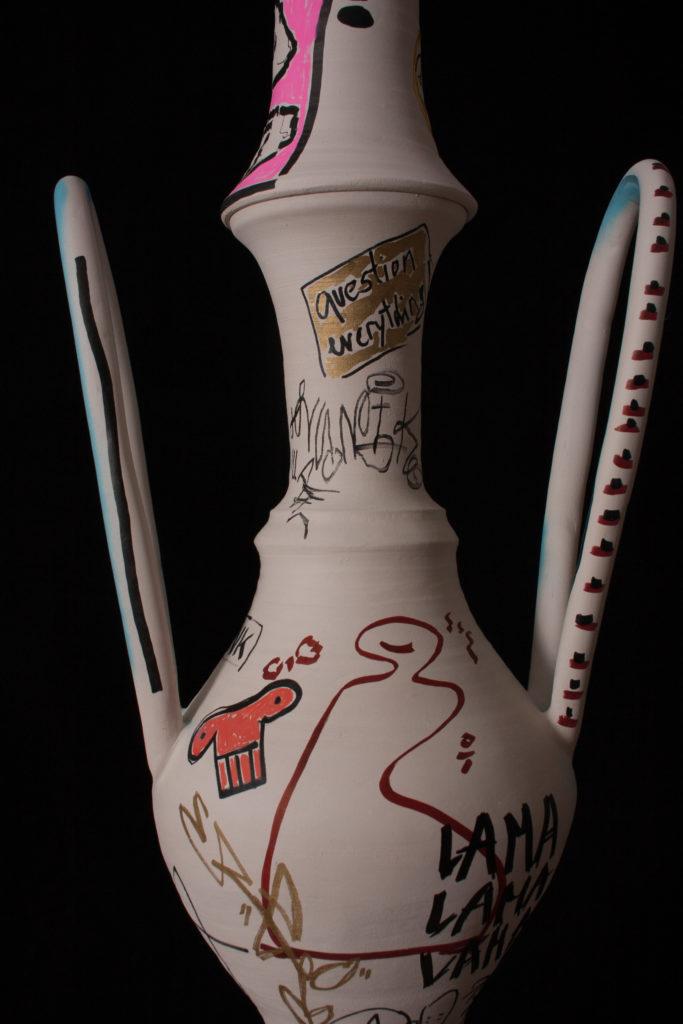 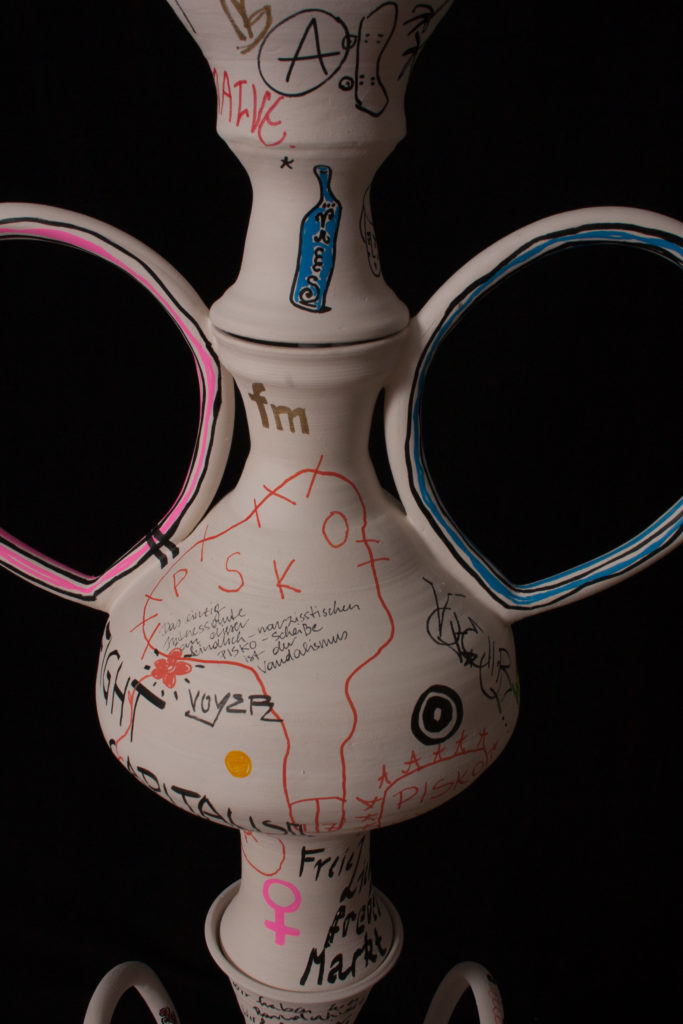 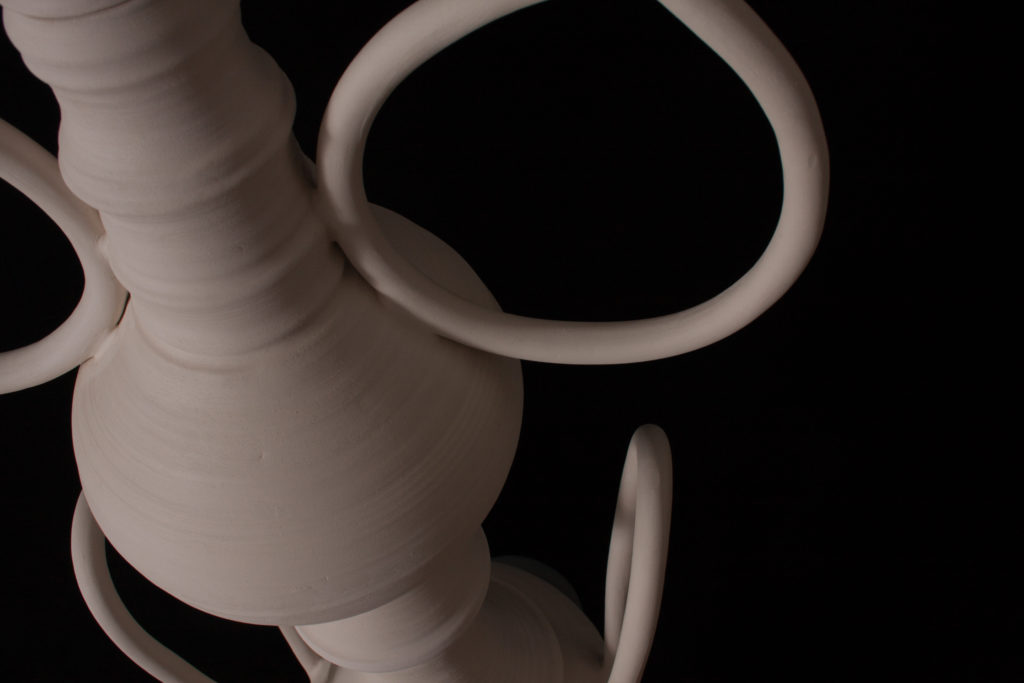 You have scribbled upon sophisticated handcrafted vases with paints from toilets. What is your statement behind it?

I did´t want to say anything, but I wanted to show something. Therein lies a significant difference. I do not need to make elaborate objects, if I can say something. Everything in this work was in a way a coincidence. At the same time I succeeded at breaking up my visual habits. I was surprised -– this experience is the highest that you can expect from an artistic process.

Do the forms of the vases have historical references?
Of course, I was inspired by the exhibition objects from the Museum of Minoan Art in Heraklion, Crete – 2000 BC. Chr.
By addressing these kinds of forms, a question came up – why do they seem so appealing to me? Is it related to my cultural heritage? We grown up with these shapes, we saw them in museums. Has it been learned to me, that certain proportions are undeniably beautiful? I found a “Formscheme” in me and I had to destroy it.

The work is called the immature fruits of popular mind? Why did you choose this title?
I grew up with this sentence. It is a quote from a statement by Pushkin. His sentence refers to such “doodles” in public space. Pushkin is the Russian national poet of the 19th century. The essence of this sentence is: everything that is scribbled on the wall is rubbish. But you can also consider this kind of communication as one of the most democratic art forms. It is just as much an expression of a culture. Above all, the Pushkin phrase implies a hierarchy of cultures. In this work, two cultural worlds are mixed together – this fact shatters the whole hierarchical structure.

Is it an option for you to exhibit your work in a public toilet?
Absolutely. On the one hand, this would be a return to the source of inspiration;, on the other hand, it will be a renewed interaction and a confrontation of the toilet visitors, with their once laid tracks, which will be now placed onto Minoan vases.

Are the toilet slogans arbitrary or are they designed according to a template?
These are no slogans, they are entire wall designs and each of them came from a specific location, being transferred to my vessels as true as possible to the original. Each vessel is assigned to a toilet facility of a specific location. The paintings are graphic DNA profiles of these places.

Why are you using Eddings instead of some ceramic colors?
There is a craftsman/woman ethos – you can only use ceramic colors on a clay surface. As well as a blacksmith may only make special connections in metal and welding is strictly prohibited. Here is also the same kind of an idea break, of what something should be like. Craft taboos are only for those who have nothing to say, except the craftsmanship – strongly worded.

Why unfiltered toilet slogans instead of selected political messages?
I’m not interested in using some great political slogans. Striking political messages are often just empty pods. An artistic work can be the explosive device to release a political meaning solely because of the arrangement of the forms or of the merging of contents, even if no direct reference to politics is visible. In that sense, I regard my work as political.
In addition, I see the wall paintings from the toilet facilities with which I am working with, not as some toilet slogans. Mostly they are complex, in the abundance abstract-looking structures that consist of words, signs, drawings, stickers, etc.

Are you criticizing the art market with your work or is it a critique on a special art understanding?
I do not want to criticize the art market. I am more interested in the topic of the under”stand”ing of art, the understanding is about “to stand still”, I want to bring a movement into this understanding.